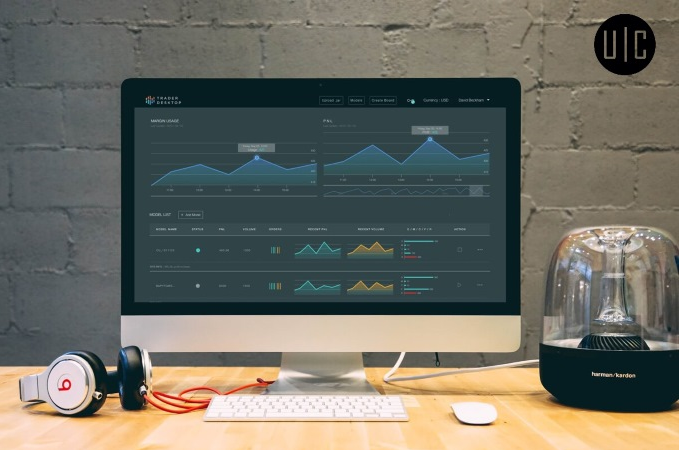 Dear Trader
Wall Street closed deeply in the red on Friday 17 May 2019, as US trade tensions with China continued following the Trump administration’s decision to add Huawei Technologies to a trade blacklist, aimed at preventing the Chinese telecom giant to conduct business with US companies. The Dow Jones retreated 99 points or 0.4%. The S&P 500 lost 17 points or 0.6%. The Nasdaq fell 82 points or 1.0%.
European stock markets closed lower on Friday, after global trade tensions escalated further and Brexit talks between UK Prime Minister Theresa May and the opposition Labour Party collapsed. The DAX 30 tumbled 71 points, or 0.6% to 12,239; the FTSE 100 dropped 5 points, or 0.1% to 7,349; the CAC 40 lost 10 points, or 0.2% to 5,438; the IBEX 35 decreased 24 points, or 0.3% to 9,280; and the FTSE MIB ended lower 47 points, or 0.2% to 21,105. www.tradingeconomics.com
Asian  shares steadied on Monday as investors caught their breath following  another week of escalating U.S.-China trade tensions, with sentiment  turning brighter after the United States said it would lift tariffs in  North America.
MSCI’s broadest index of Asia-Pacific shares outside Japan added  0.6%, reflecting modest gains in markets across the region after the  broad index finished at its lowest since Jan. 24 on Friday, down 3% for  the week.
Australian shares underpinned the market’s firmer mood, jumping 1.7% after the center-right Liberal National Coalition pulled  off a shock win in federal elections, beating the left-wing Labor Party.
Election results also look set to lift markets in  India. India’s NSE Stock Futures listed in Singapore rose 2.4% and the rupee strengthened after exit polls showed Indian Prime Minister Narendra Modi is likely to return to power with an even bigger majority in parliament.
Shares in the trade-sensitive markets of South Korea  and Taiwan also rose. The Taiwan SE Weighted Index added 0.3% and  Seoul’s KOSPI rose 0.6%. – Reuters

USDZAR – Technical Analysis
Over the short term, the pair has broken out of a bull flag pattern, continuing in it’s medium term, rounding channel formation.This breakout coincides with a test of the 200-day moving average as well as the 50-day moving average which t he price has reclaimed. We are also seeing the formation of a larger inverse head and shoulder – that stretches back to 01-November-2018 as well as a shorter term formation that has been in development since early March 2019.

JSE Top 40 – The index has retreated from the overhead resistance as well as the 200-day 2 standard deviation level. In the short term, the 48800 level remains a level where we possibly could see a rebound while the 52240 level is where traders should monitor as a distribution zone.

Richemont is a share that has managed to play out according the’ technical textbook’.
– Back in August 2018, the R130 level was were we saw a short/sell opportunity Link here: http://tiny.cc/c0jx6y
From there we saw the price test a low of R88 by November.
– Then in December a buy/long was looming, with R90.69 as the entry level identified. Link here: http://tiny.cc/x4jx6y
Last week we saw the price rally on the back of it’s results as well as assisted by a weaker Rand.
At current levels, the technical setup suggests that there could be some short term consolidation before the next leg higher with the price potentially forming a ‘bull flag’.
For medium term equity portfolio traders, a break above the downward trend line would strengthen the case for a move to 125 while a move back below R100 is a good opportunity to accumulate the share.
For short term CFD traders, the resistance level at R113/115 is a level to watch for a move back to R105 (short/sell).

A little lower before it turns higher: Last week we identified Exxaro Resources as a short term play on the buy/long side. Entry was 15510c, stop-loss 15170c, with a target of 16300c. As is often the case, a share would dip below one’s level before moving higher. This is exactly what happened with EXX however our stop-loss was tested before we saw a sharp move higher toward the target of 16300c on the following day. Lesson learned: you can buy around the bottom but not at the bottom.

Copper / US Dollar-Korean Won (Inverse Reading) – historical correlation however in the short term there is a small disconnect.

The Week Ahead
This week minutes from the Fed, RBA and ECB policy meetings will be keenly  watched, alongside US durable goods orders, housing data and flash  Markit PMIs; UK inflation and retail trade; Eurozone flash consumer  confidence and Markit PMIs; Germany business morale; Japan Q1 GDP  growth, trade balance, inflation, machinery orders and Nikkei  Manufacturing PMI. Investors will also react to European parliamentary  elections, as well as Indian general election results.
In the US, investors will be waiting for the FOMC minutes due on Wednesday for further clarification on the next monetary policy steps. Regarding  the economic calendar, the country is scheduled to release its durable  goods orders report for April, which will probably show a slump in  demand following its biggest rise in seven months. In addition, flash  Markit PMIs are likely to point to a slight acceleration in private  sector growth during May, while housing data is set to paint a mixed  picture: existing home sales should increase in April, after falling by  the most since 2015; while new home sales are seen dropping from  one-and-a-half-year high. Other notable publications are Chicago Fed  National Activity Index and Kansas Fed Manufacturing Index.
Other key data for America include: Canada retail sales; Brazil business confidence; and Mexico final reading of Q1 GDP growth, as well as trade balance.
In the UK inflation figures from the ONS are expected  to show an increase in consumer inflation rate to a five-month high  while producer inflation is seen at three-month low. Also, retail trade  in April is seen falling for the first time this year. CBI factory  orders and public sector net borrowing will also be in the spotlight.  Elsewhere in Europe, the ECB publishes its monetary policy meeting accounts; while flash Markit PMIs for the Eurozone, Germany and France are forecast point to further deterioration in their manufacturing  sectors during May. Traders will also keep an eye on the Eurozone flash  consumer confidence; Germany final reading of first-quarter GDP growth,  alongside business survey and producer inflation; and Turkey industry and consumer morale.
In Japan, investors will be focusing on the preliminary  estimate of Q1 GDP growth, alongside foreign trade figures, inflation  rate, machinery orders, flash Nikkei Manufacturing PMI and the final  reading of March’s industrial output. Data is expected to show the  country’s economy contracted in the first three months of this year,  while exports are forecast to have declined 1.8 percent in April due to  ongoing trade tensions. Also, machinery orders are seen falling in March  and the core consumer price inflation is likely to pick up to 0.9  percent in April.
Elsewhere, the Reserve Bank of Australia will be releasing the minutes of its last monetary policy meeting.  The country will also be publishing Westpac leading index, Q1  construction work done and flash CommBank PMIs. Other highlights for the  Asia-Pacific region include: New Zealand trade figures and retail sales; Thailand Q1 GDP growth and trade balance; and Malaysia inflation rate.
On the political front, European parliamentary elections will be closely  watched, as well as Indian general election results due on Thursday. 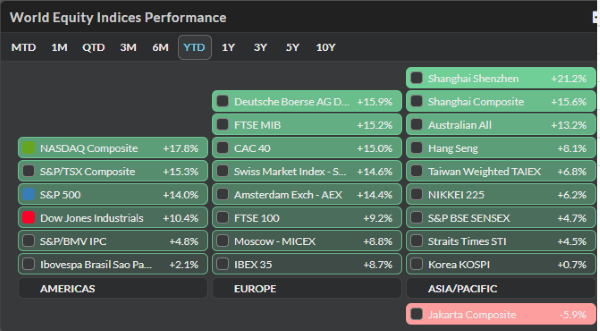 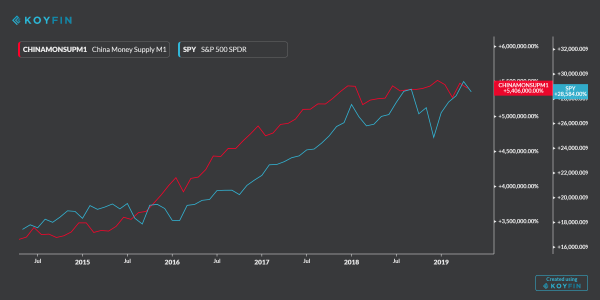 source: koyfin.com
Making Headlines
– Pinterest shares tumble as profit seen elusive Pinterest’s shares slumped after the online scrapbook company’s disappointing annual forecast shook investors’ faith in its ability to turn in a profit soon. Reuters
– Saudi energy minister recommends driving down oil inventories, says supply plentiful. Saudi Energy Minister Khalid al-Falih said on Sunday he recommended “gently” driving oil inventories down at a time of plentiful global supplies and that OPEC would not make hasty decisions about output ahead of a June meeting. “Overall, the market is in a delicate situation,” Falih told reporters before a ministerial panel meeting of top OPEC and non-member oil producers, including Saudi Arabia and Russia. Reuters
– U.S. may scale back Huawei trade restrictions to help existing customers. The Commerce Department, which had effectively halted Huawei’s ability to buy American-made parts and components, is considering issuing a temporary general license to “prevent the interruption of existing network operations and equipment,” a spokeswoman said.
Potential beneficiaries of the license could, for example, include internet access and mobile phone service providers in thinly populated places such as Wyoming and eastern Oregon that purchased network equipment from Huawei in recent years
– IMF’s Lagarde says U.S.-China trade war could be risk for world economic outlook: The trade war between the United States and China could be a risk to the world economic outlook if it is not resolved, International Monetary Fund Managing Director Christine Lagarde told Reuters on Friday during a visit to Uzbekistan. “Obviously, the downside risk that we have is continued trade tensions between the United States and China,” Lagarde said, referring to the IMF’s world economic outlook.